Lena Schmidt's Work Series »Into the Woods«: Encounters with the (Un)familiar
Immersed in the abysmal blackness of nocturnal forests, our gaze on Lena Schmidt's atmospheric series »Into the Woods« encounters shadowy silhouettes and a sublime glow. The latter seems to be less inherent in the strange-looking objects peeling out of the nocturnal darkness than to arise from an unknown source of light in the depths of the artistic material. The imaginary journey into the night-black forest, to which the Hamburg artist invites us, turns into an encounter with wood as a material. The ambiguity of the title thus marks a twofold experience: the confrontation with the infinite depths of one's own inwardness and the sensual perception of the material origin of the work series.
Continue reading at the bottom of the page 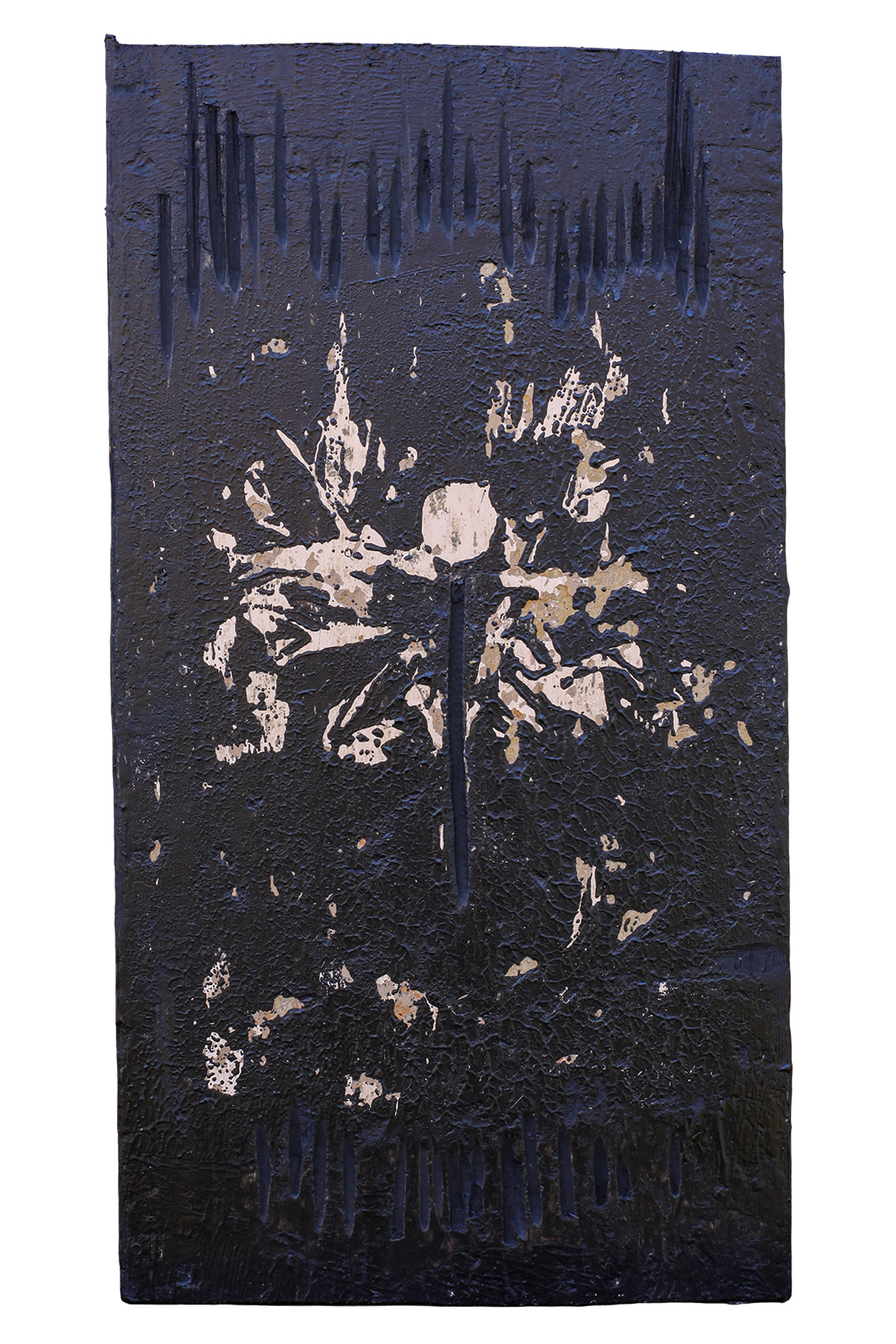 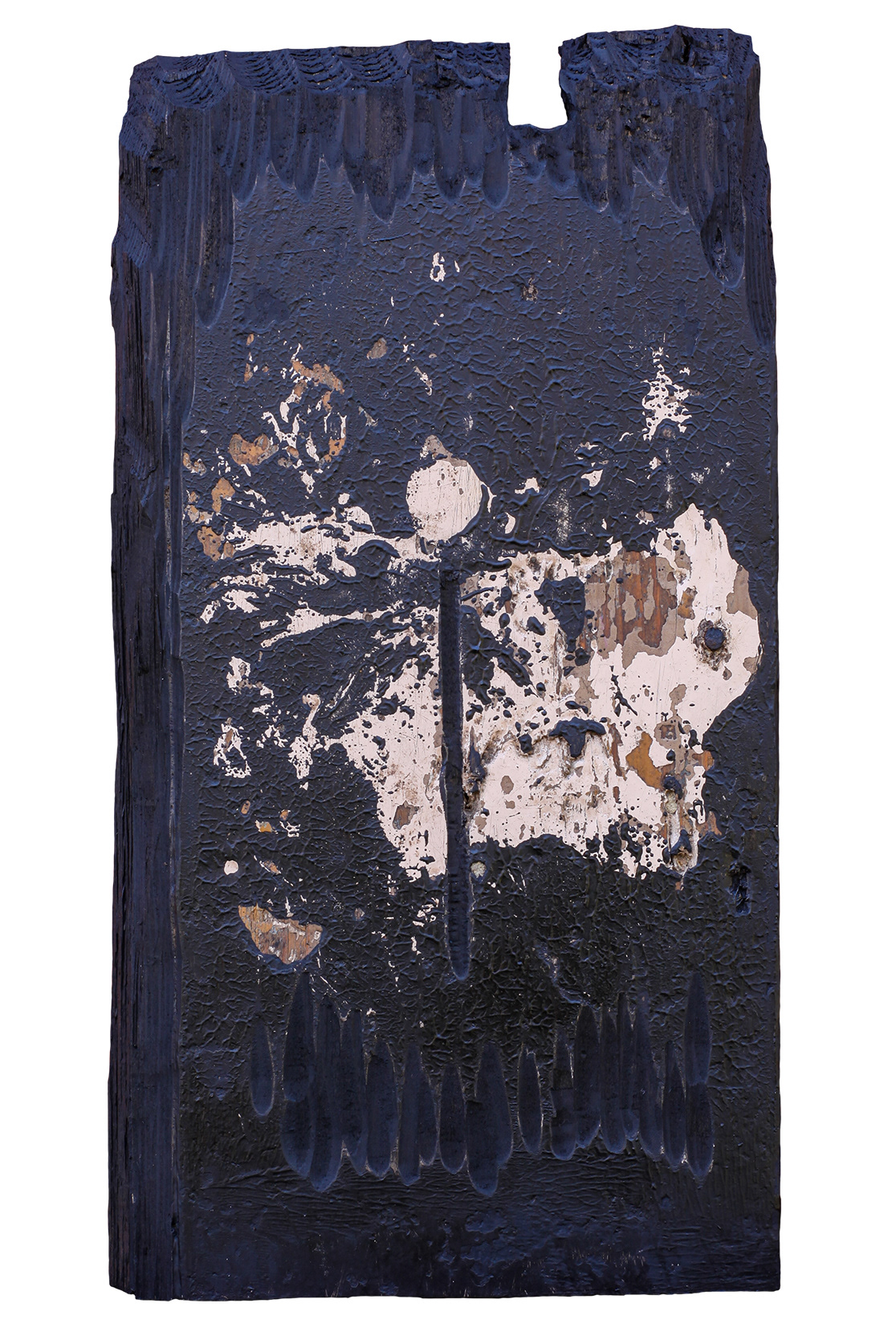 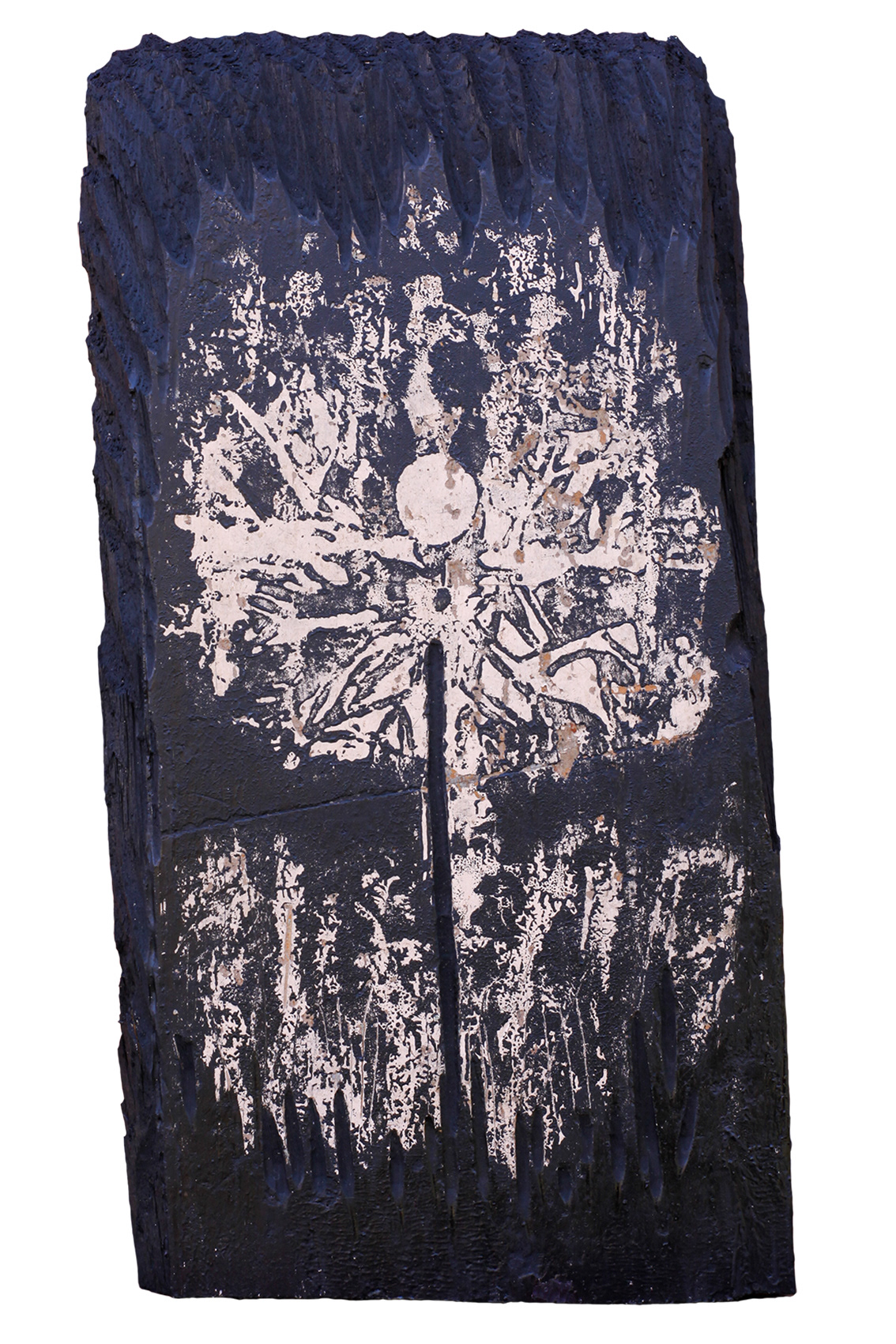 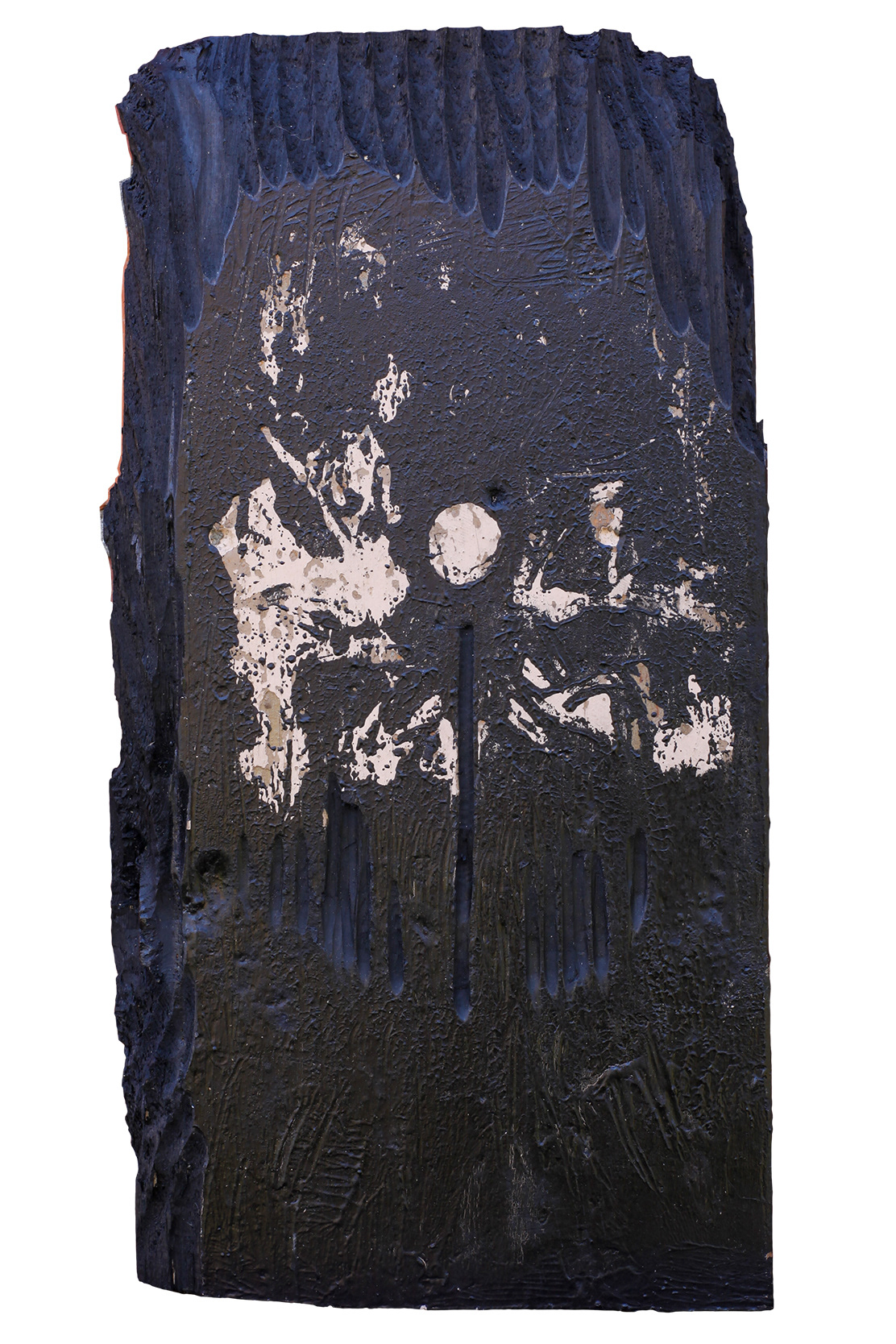 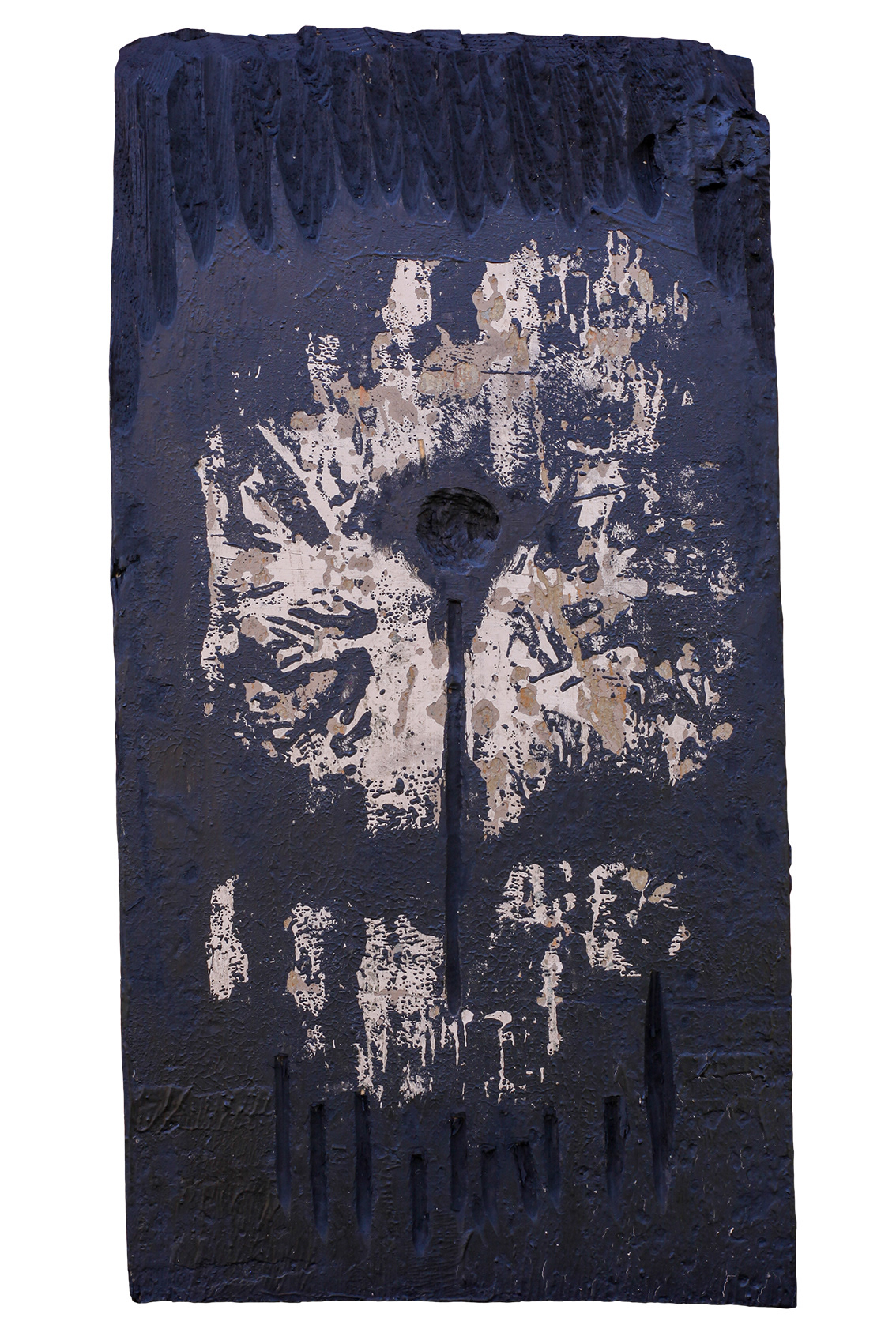 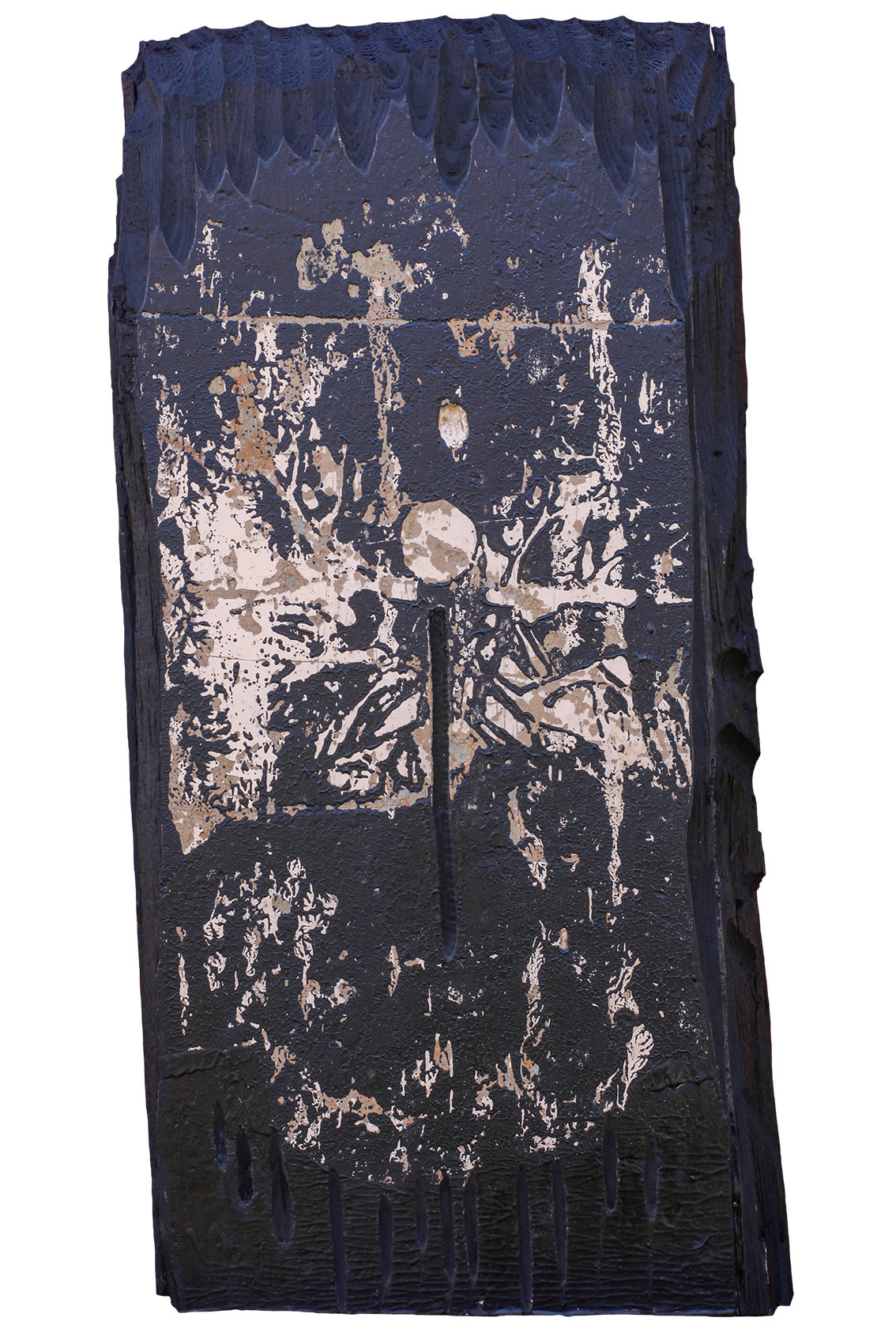 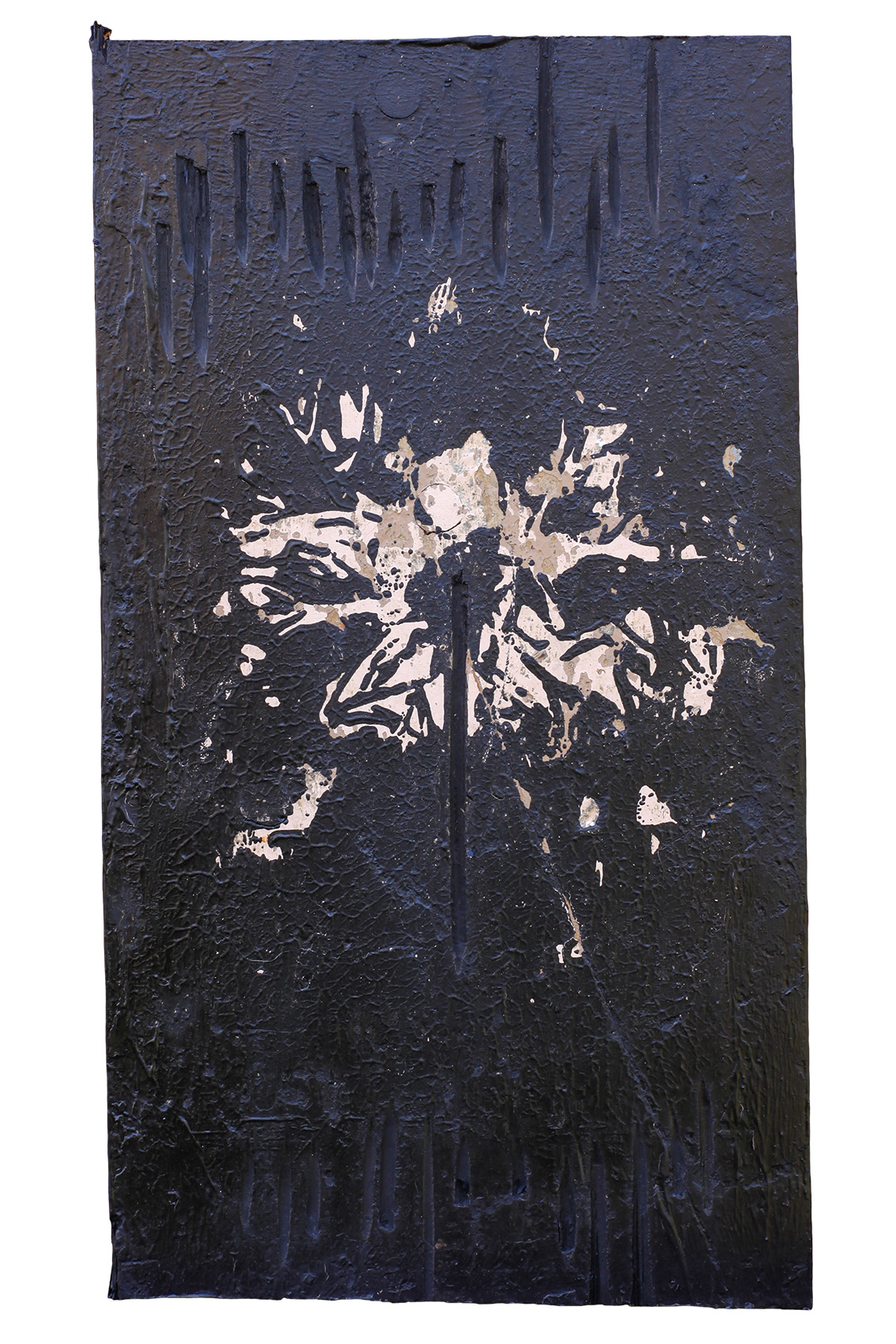 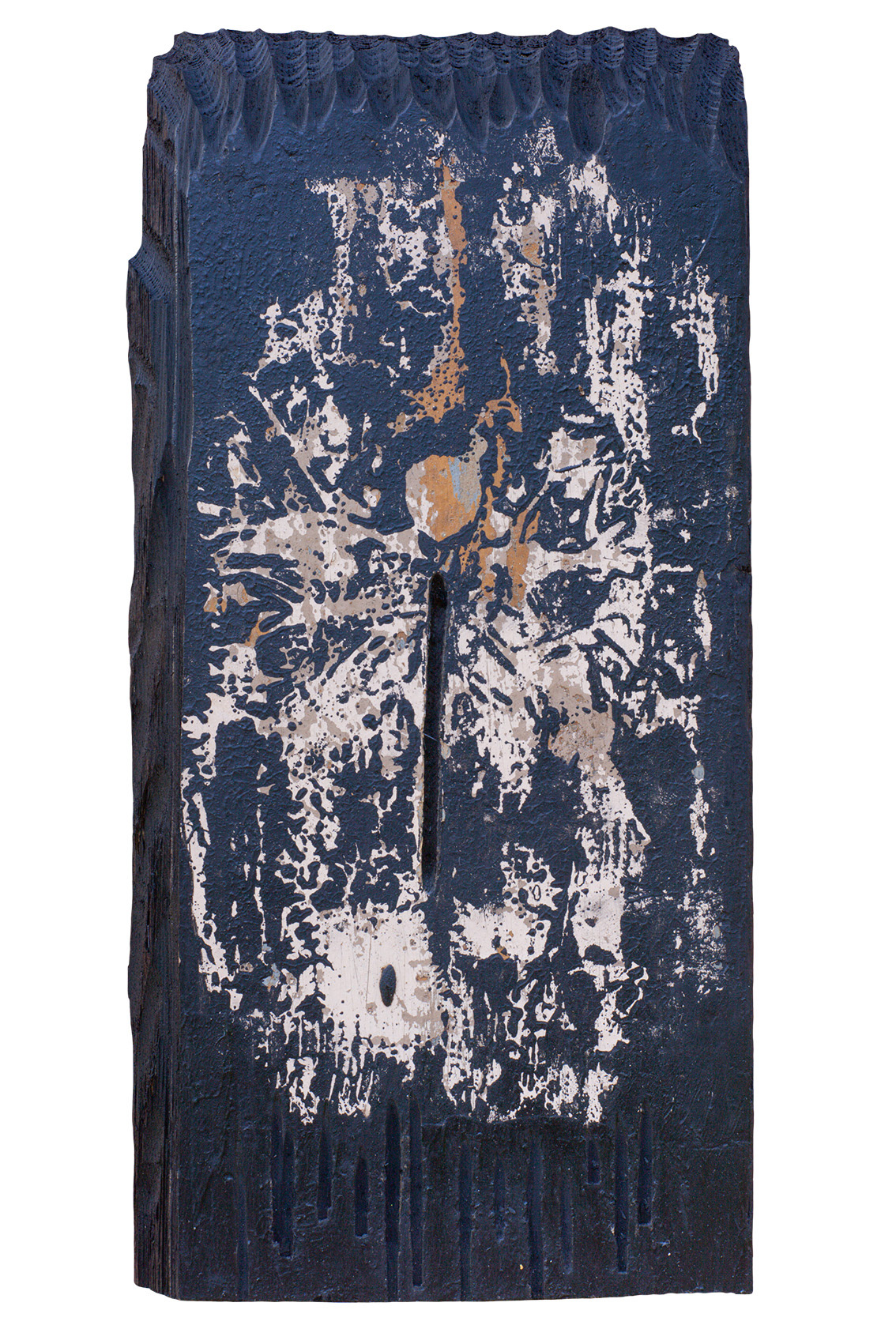 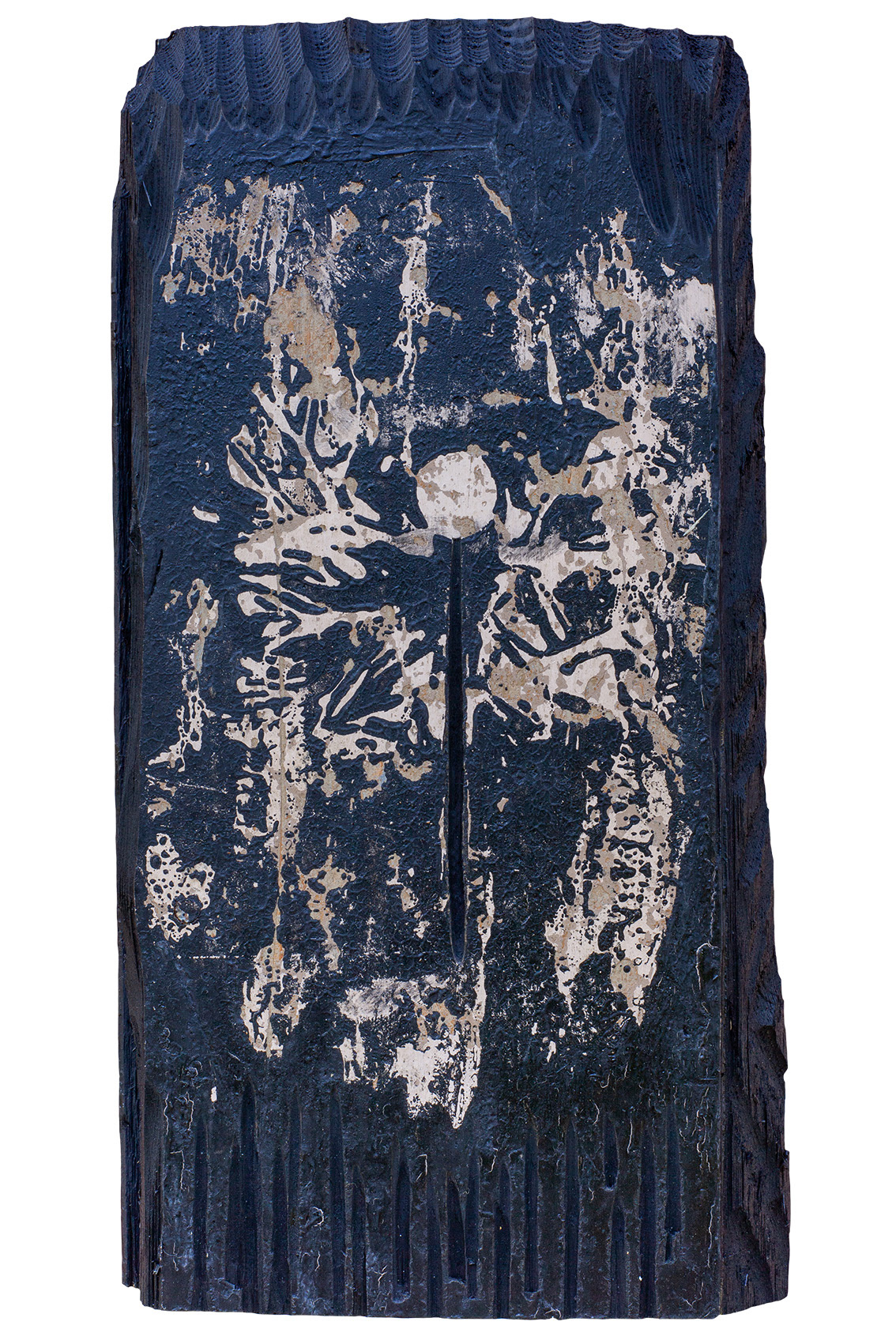 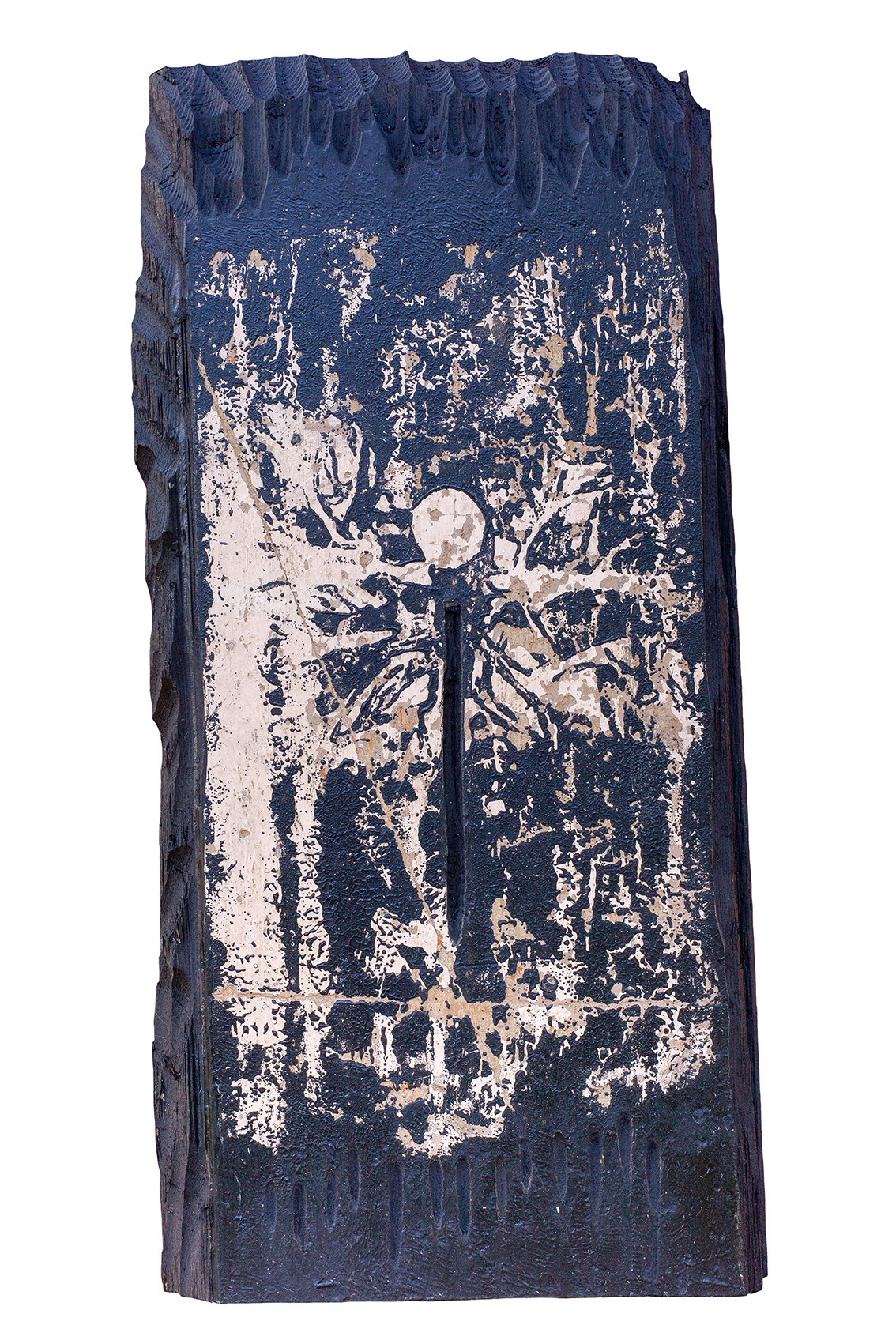 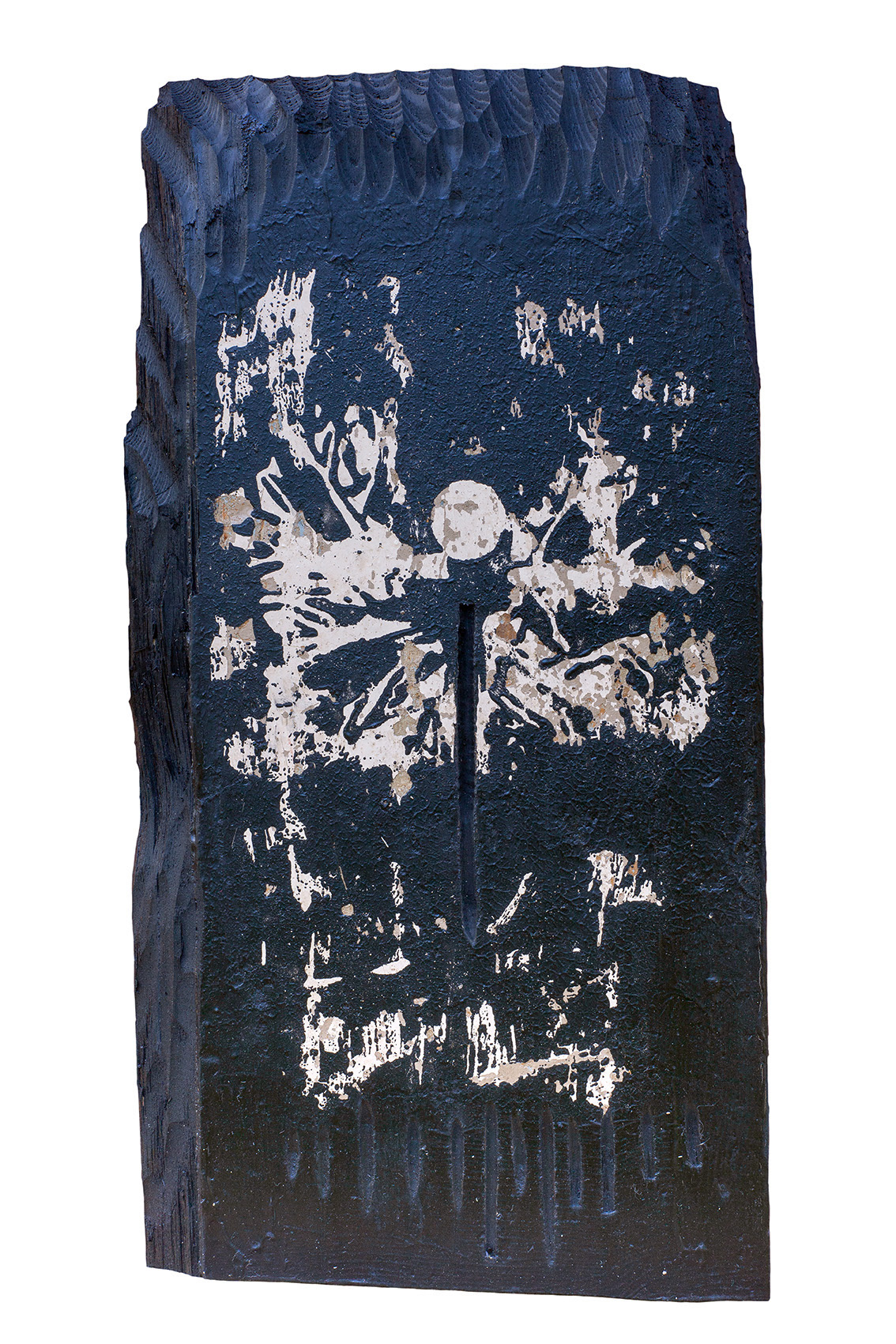 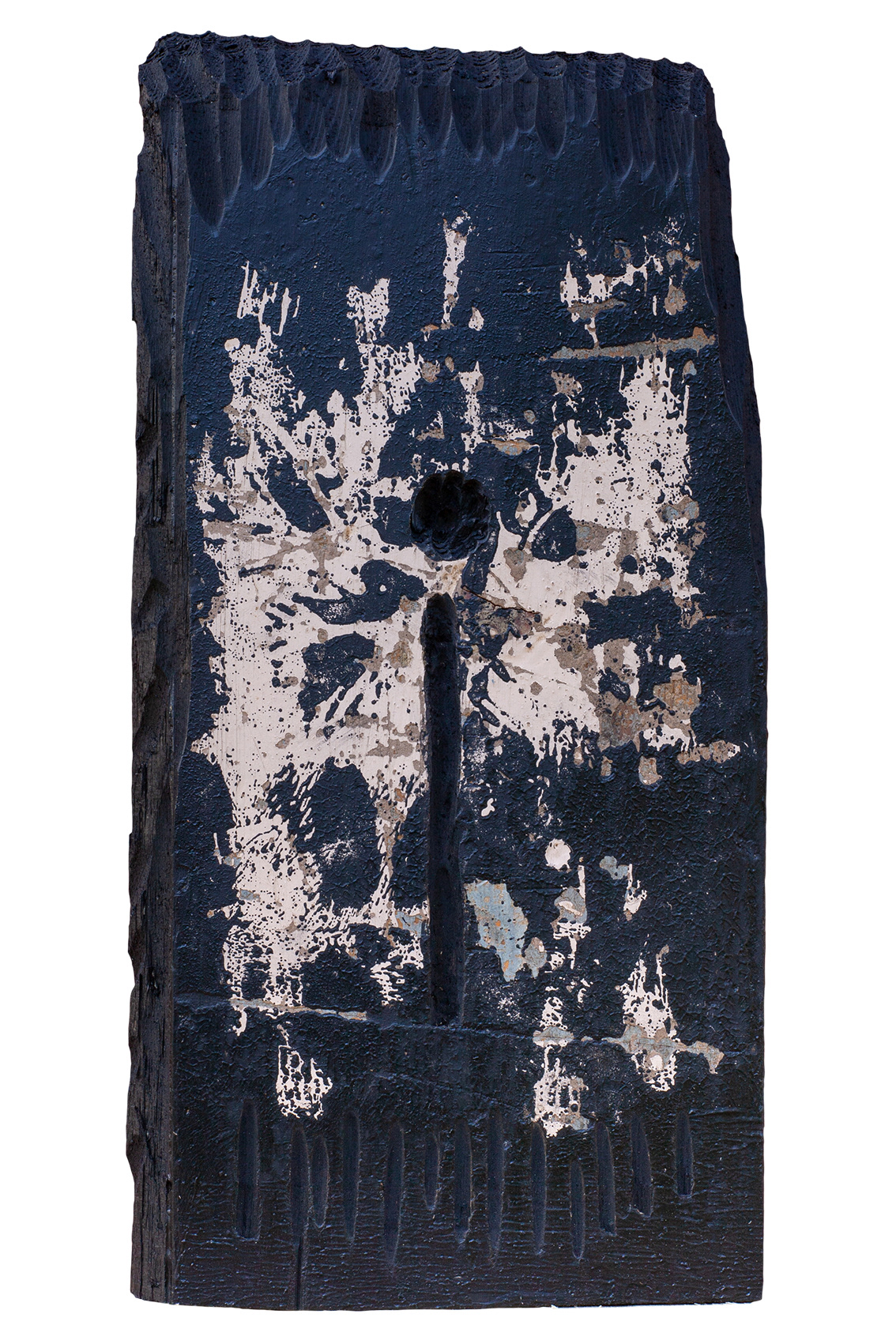 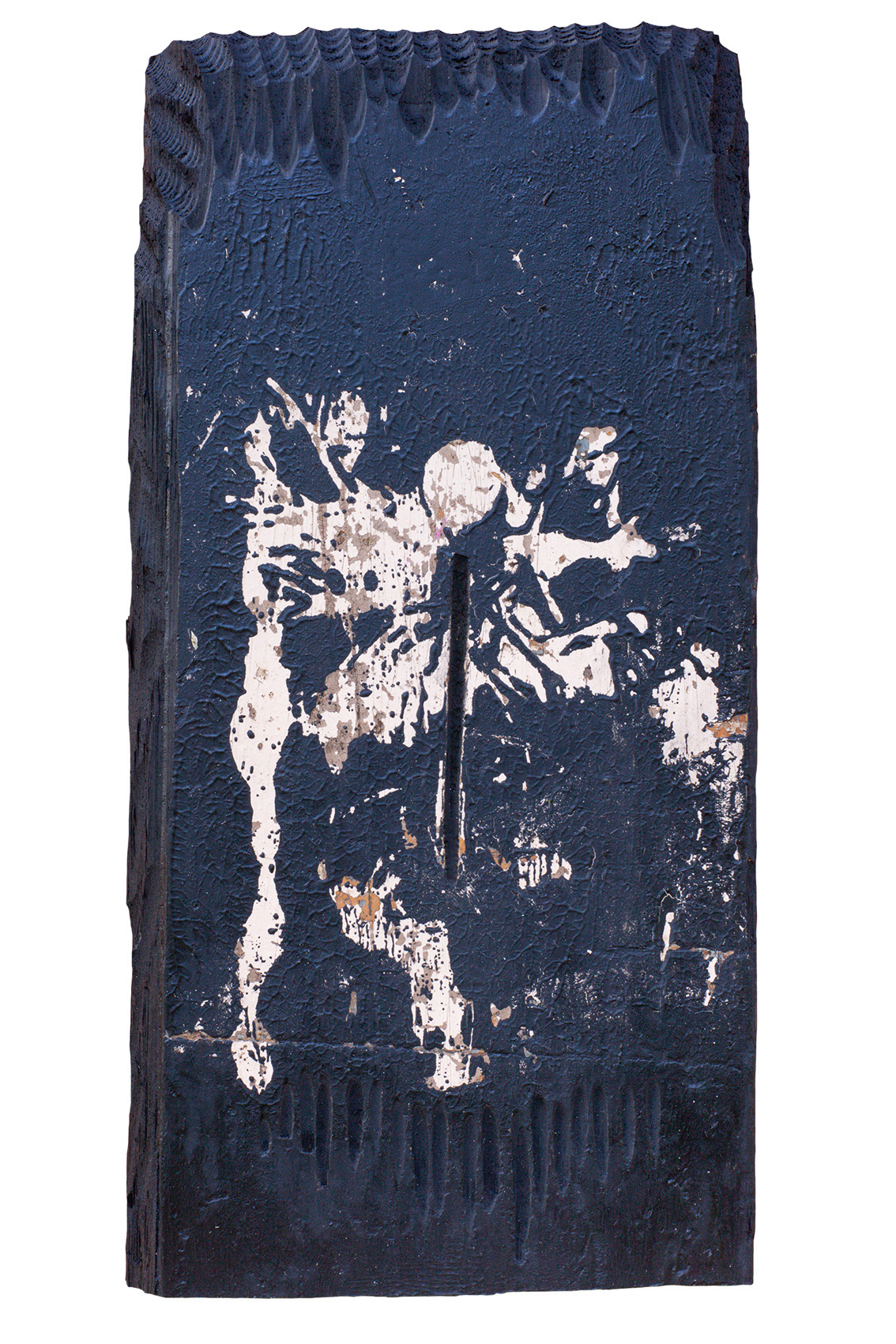 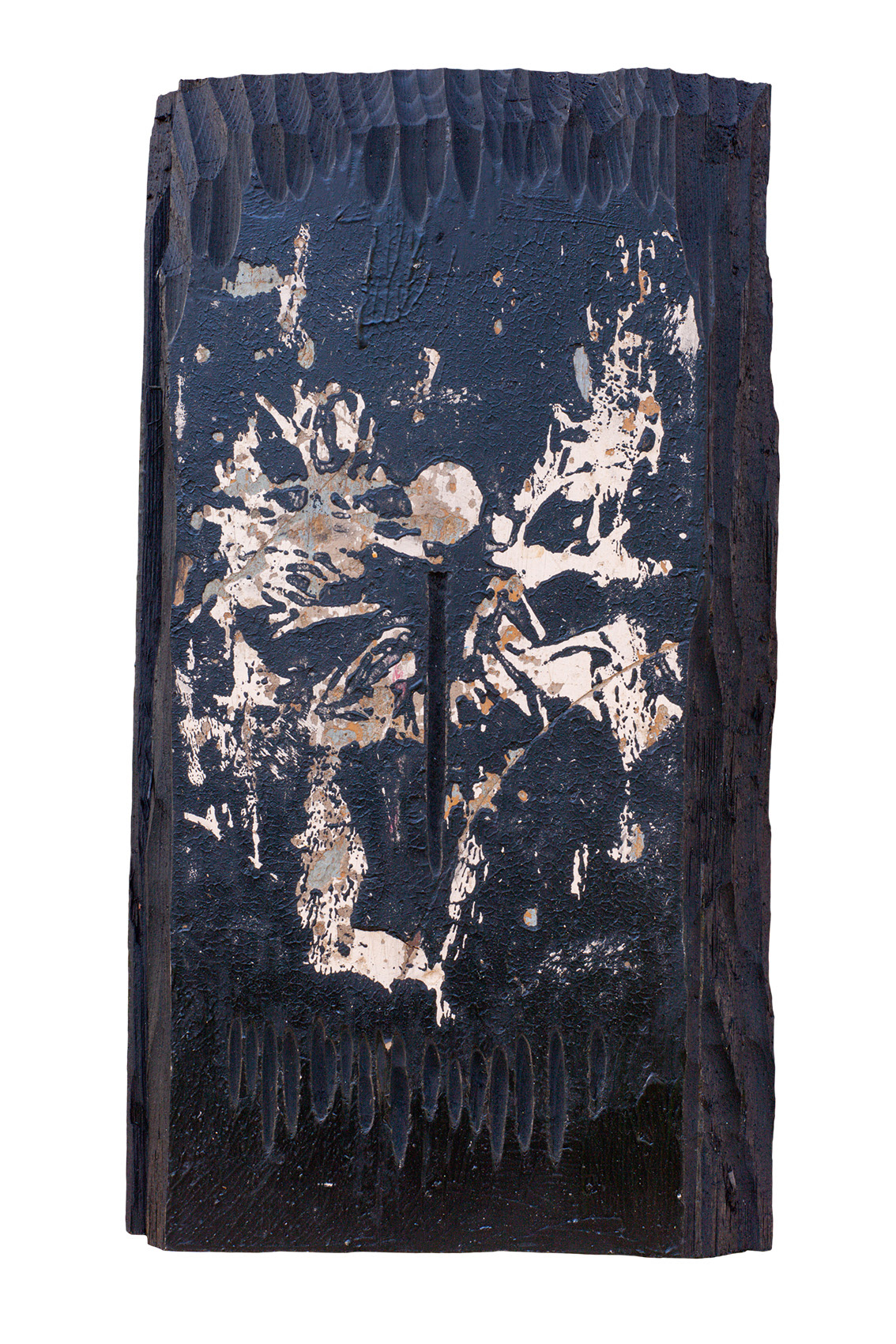 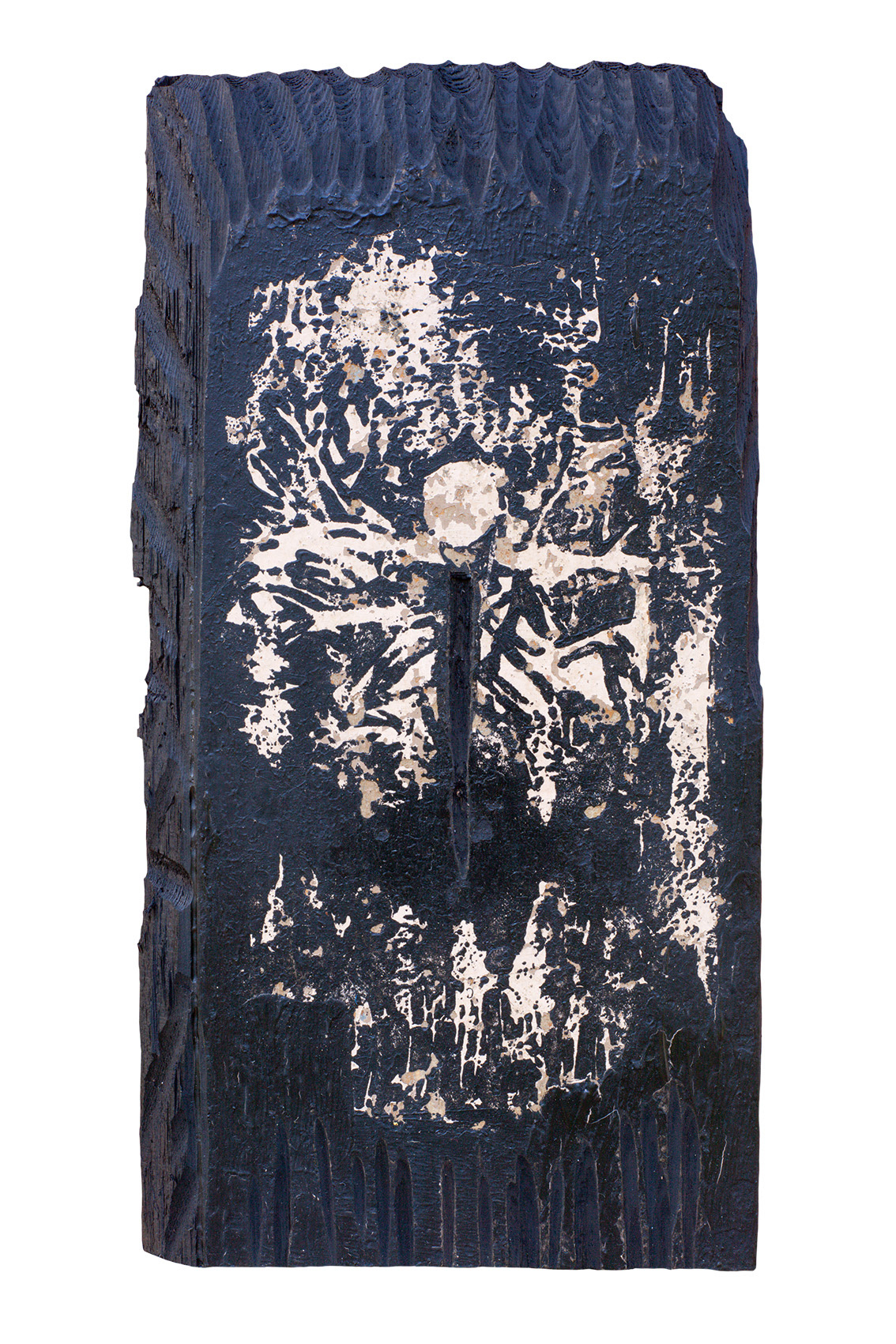 »Into The Woods No.1«, Lena Schmidt 2020, bamboo feather drawing, ink, varnish, arcylic and carvings on found ply wood, 83 × 61 cm
The piece »Into the Woods 4« from 2021 is determined by an »aesthetic of inwardness« that can already be found in the so-called »Dark Romanticism« of the late 19th century, influenced by the beginnings of psychology. Inspired by Sigmund Freud's »Theory of the Uncanny« as an experience of the unfamiliar within one's own inner self, diffuse urban scenes and sunlight shimmering behind pale tree trunks became artistic metaphors. These mark what eludes any representation: the abyss of the imagination. In Lena Schmidt's work »Into the Woods No. 4«, the viewer's gaze into the depths of the night is answered by a subtle glow which shimmers like a mysterious pair of eyes between the three trunks of the silhouetted trees. The darkness evoked by a mixed technique (inks, India ink, marker pen, lacquer and acrylic) gains diffuse depth through numerous nuanced shades of colors. Despite the loneliness of the nocturnal scene without human figures, a moment of mysterious encounter occurs in the context of reception, namely with the foreboding, unconscious and ultimately unrepresentable.
However, in the reception of the work »Into the Woods 3« (2021), this moment of encounter shifts from an imaginary to a physical level as soon as the object-like material wood itself becomes apparent. The six broken round timbers indicate views of nocturnal forest scenes in a blue glowing twilight, but were also arranged by the artist into a group of trees. Here, the immersive absorption into a nighttime scene tips in favor of a conceptual awareness regarding the selection of the artistic material, its use and its arrangement. Similar to a family constellation, connections between the individual motifs catch the eye and enter into an intriguing interaction with one another. Object-free and object-related perception is thus kept in a constant flux.
The unfolding impression of natural forms growing from an indefinite blackness into a bright blue abruptly comes to an end with the artistic material itself. As a consequence, the view into the sublime depths of the forest changes into a perception of the round timbers and their resemblance to broken trunks. These certainly evoke associations with the death of forests as one of the most acute crises of our time, but without allowing the intrinsic material value of work to merge into an ecological dimension. The topic of subjective experience, the encounter between man and nature with its often catastrophic consequences, connects Lena Schmidt's two series »Into the Woods« and »Broken Places«. Urban and natural landscapes are inseparably linked in the artist's works, not only in terms of motif, but also in terms of the mode of perception. The artist's landscapes take us on a journey into the sublime worlds of our own inwardness, which we undertake both imaginary and haptically.
Text: Dr. Anne Hemkendreis
↑Back to Top